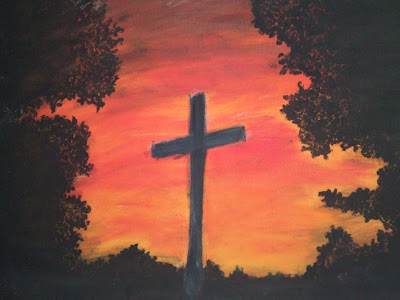 {a canvas I painted for my sister; Camp Winnataska}

The Crucifixion of Jesus
So the soldiers took charge of Jesus. 17 Carrying his own cross, he went out to the place of the Skull (which in Aramaic is called Golgotha). 18 There they crucified him, and with him two others—one on each side and Jesus in the middle.

19 Pilate had a notice prepared and fastened to the cross. It read: JESUS OF NAZARETH, THE KING OF THE JEWS. 20 Many of the Jews read this sign, for the place where Jesus was crucified was near the city, and the sign was written in Aramaic, Latin and Greek. 21 The chief priests of the Jews protested to Pilate, “Do not write ‘The King of the Jews,’ but that this man claimed to be king of the Jews.”

23 When the soldiers crucified Jesus, they took his clothes, dividing them into four shares, one for each of them, with the undergarment remaining. This garment was seamless, woven in one piece from top to bottom.

This happened that the scripture might be fulfilled that said,

“They divided my clothes among them
and cast lots for my garment.”

So this is what the soldiers did.

25 Near the cross of Jesus stood his mother, his mother’s sister, Mary the wife of Clopas, and Mary Magdalene. 26 When Jesus saw his mother there, and the disciple whom he loved standing nearby, he said to her, “Woman, here is your son,” 27 and to the disciple, “Here is your mother.” From that time on, this disciple took her into his home.

The Death of Jesus

28 Later, knowing that everything had now been finished, and so that Scripture would be fulfilled, Jesus said, “I am thirsty.” 29 A jar of wine vinegar was there, so they soaked a sponge in it, put the sponge on a stalk of the hyssop plant, and lifted it to Jesus’ lips. 30 When he had received the drink, Jesus said, “It is finished.” With that, he bowed his head and gave up his spirit.

…………..
On Palm Sunday, Jesus rode into the city. Those crowding the streets, waved palm branches, and shouted “Hosanna!” They were expecting His arrival to be the end to their persecution & oppression from Rome. The people believed he was going to establish His Kingdom here on Earth. Jesus, had a different freedom in mind. On the cross, as Jesus breathed his last breath, he spoke.
“It is finished.”

Jesus fulfilled God’s purpose for His life here on Earth. He came to save us from our sin. On the cross Jesus took the ultimate punishment for our transgressions, death. But, in His death, He gave us life. He showed amazing grace. A gift freely given, expecting nothing in return but for us to follow him. Today on Good Friday we remember His sacrifice, the true Passover lamb. To Him be the glory.

Lyrics: In Christ Alone
‘Til on that cross, as Jesus died
The wrath of God, was satisfied
For every sin, on His was laid
Here in the death of Christ, I live But His death we have reason to rejoice, because we know Sunday is coming!